I am My Daddy's Girl

Daddy used to say that having me changed his life.

He was still in his mid-20's when I was born so it was no surprise that he still had a major hangover from his bachelor days.  Mom said he was not much help when I was a baby. She can't remember him changing my diaper or getting up to feed me during the late nights.

In our recent stay in their house, I asked him to watch over my 2-year old son while I went out for a run. When I came back, Caleb had just woken up and dad was fazed why our son refused to drink the milk he prepared for him. When I asked him how much milk he added to the cup of water, he said.. only one scoop. Oh, that explains it!  I could not blame him though. It has been decades since he last prepared formula milk. Maybe he just forgot.

Daddy is who he is. He never pretended he knows how to do everything, but he always tried his best.

I remember one time mommy was in Hongkong for a business trip at the same time our household helper had her day-off, dad managed to prepare dinner for the four of us. It was canned sardines in tomato sauce with ampalaya. Since it was only me who ate ampalaya, my siblings had to settle for plain rice. Poor dad... there was was no Jollibee yet to have rescued him. The following day, he had our grandmother cook for us.  We would always have a good laugh reminiscing that unforgettable day.

Kids may be naturally attached to their moms. But I was my daddy's girl.  Mommy used to be shy and often refused to join my dad in his office socials. I "chaperoned" my dad during those times. Dad usually tagged me along in company parties and outings. I was a little girl version of him and I was a darling among his friends. Somehow, his charm and bubbly personality rubbed off on me. When I wanted something and my mom said no, I often succeeded in twisting my daddy's arm. But although daddy had a soft spot for me, he was also firm when I needed to be disciplined.

People like being around my dad. Not only was he congenial and amiable, he also had the ability to see through the hearts of people and minister to their needs. We grew up having different kinds of people in our home. He always welcomed them no matter what their social status was. He personally served his construction workers with coffee and bread during their merienda breaks. These people loved him like their own brother or father. People always joked him that he could pass for a politician, a possibility then that always scared my mom.

Dad first took me to Sunday School and introduced me to having a personal relationship with God. He was very diligent in gathering us every Sunday night to pray and have our family devotion. In the car, he would play worship songs and bible messages. It was not something that we were not so fond of, but eventually, we got used to it and learned to listen as intently as he did. Later on, those messages resonate in me like they were daddy's own preaching.

But what I am most proud of about my dad is that he is doing what God has called him to do. His achievements may not exactly be in conformity to the world's ideal of a successful man. He is done making those temporary investments. He is making good use of his productive years investing for eternity.

I know that my daddy is not perfect, but for me, he is a reflection of God's unconditional love. He is patient, slow to anger and always showing me kindness and grace even when I do him wrong.  In his limited ability, he gave me what he thought best.  Daddy may think that having me changed his life. But his real legacy is teaching me how to live it.

Happy Father's Day Dad! I love you very much! 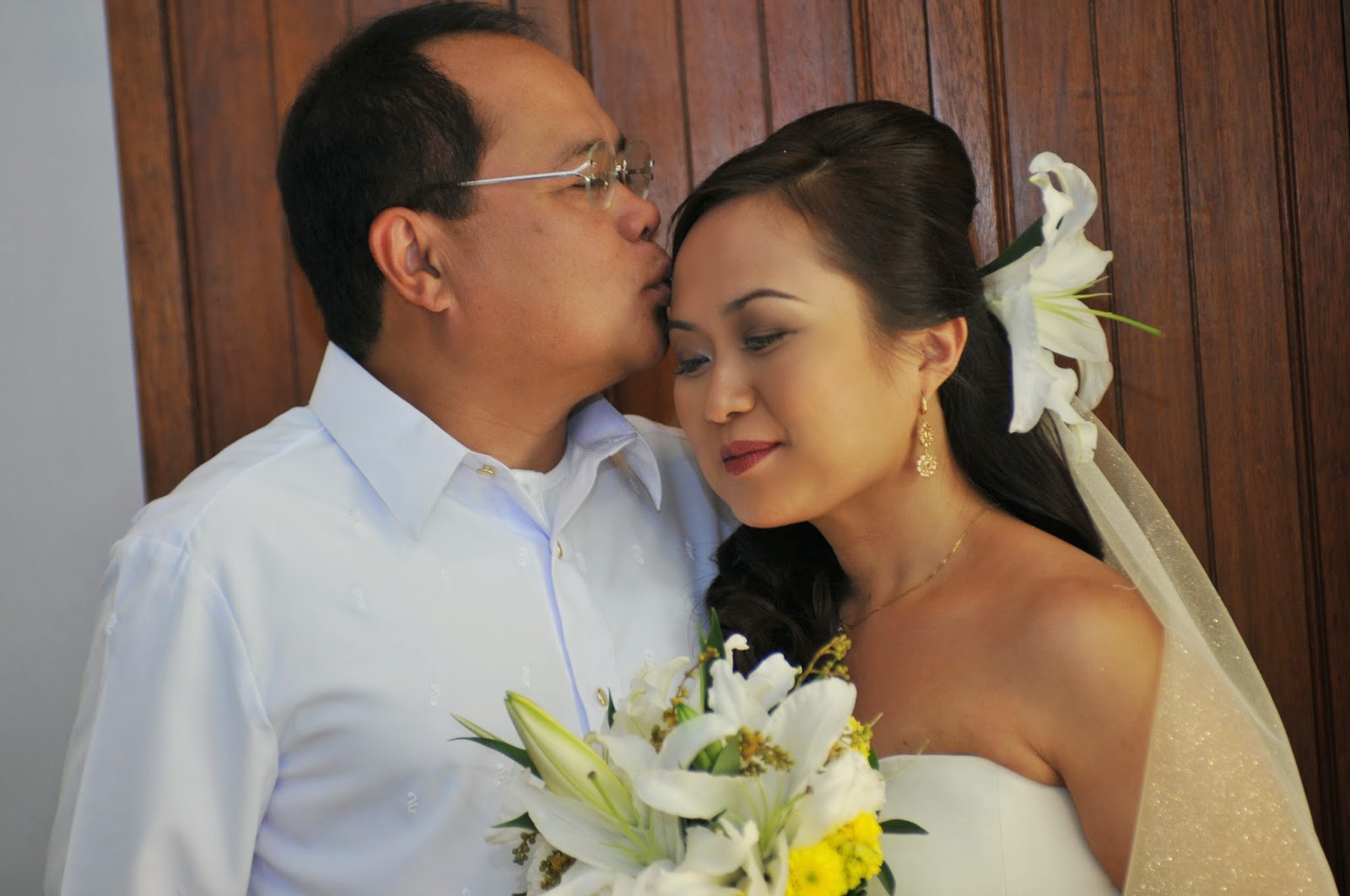 Posted by Unknown at 9:20 PM No comments:

Email ThisBlogThis!Share to TwitterShare to FacebookShare to Pinterest
Labels: Thoughts

When we first moved in to our new condo unit almost 3 years ago, I had just given birth to our first child. I was recovering from my cesarean operation then and still learning the ropes of being a first time mom so we did not have the chance to complete the finishing touches in our new home.

Earlier this year, Randy and I prayerfully listed our long overdue home improvement project as one of our priorities. Although this will only require simple and minor renovations, some things have kept us from kicking it off.  For one, we did not have a household helper who can look after Caleb while I supervise the work to be done. Secondly, any renovation, no matter how simple will demand additional budget.

Without knowing when we'll actually start the project, we went ahead in planning the scope of work based on our current needs. We decided to limit the work to the following: installation of air condition unit for our living room, installing a back splash for our kitchen walls, add more cabinets for extra storage and changing our window covers.

After a few weeks of mess and chaos, we have finally completed our home improvement project by the end of April. Even if we wanted to do it earlier, the timing turned out to be perfect because our new household help just came in right before we started the project.

Taking up this simple home improvement project has taught us some lessons on how to give your home a face lift even with limited budget. While it may be good to hire an interior designer, with some patience, resourcefulness and creativity, you will also be able to carry out your own home improvement project. You might be able to pick up a thing or two from our lessons. Here are some tips:

1.  Plan ahead. Set a budget and canvass for the best deals on your materials

We canvassed in 4 appliance stores before we found a good deal for a Koppel Inverter in Robinsons Appliances in Galleria. We saved almost P 10,000 including installation charges and the freebie we got from our purchase.

Among the different aircon brands, we chose Koppel because its features are almost the same as the more expensive brands like Carrier and Panasonic. We took advantage of the free aircon survey and asked different  suppliers and aircon technicians which one they personally prefer.  Koppel was one of their top 3 choices because of the reliability, reasonable price and efficient after sales support. Well, that one, we still have to find out.. Hopefully not very soon.

Because our property developer will not allow us to drill a hole on the beam where the aircon was intended, we had to install a cove underneath to hide the pipes. Instead of permanently mounting the cove, we decided to use screws so it can be easily removed if and when the air conditioner needs to be repaired. 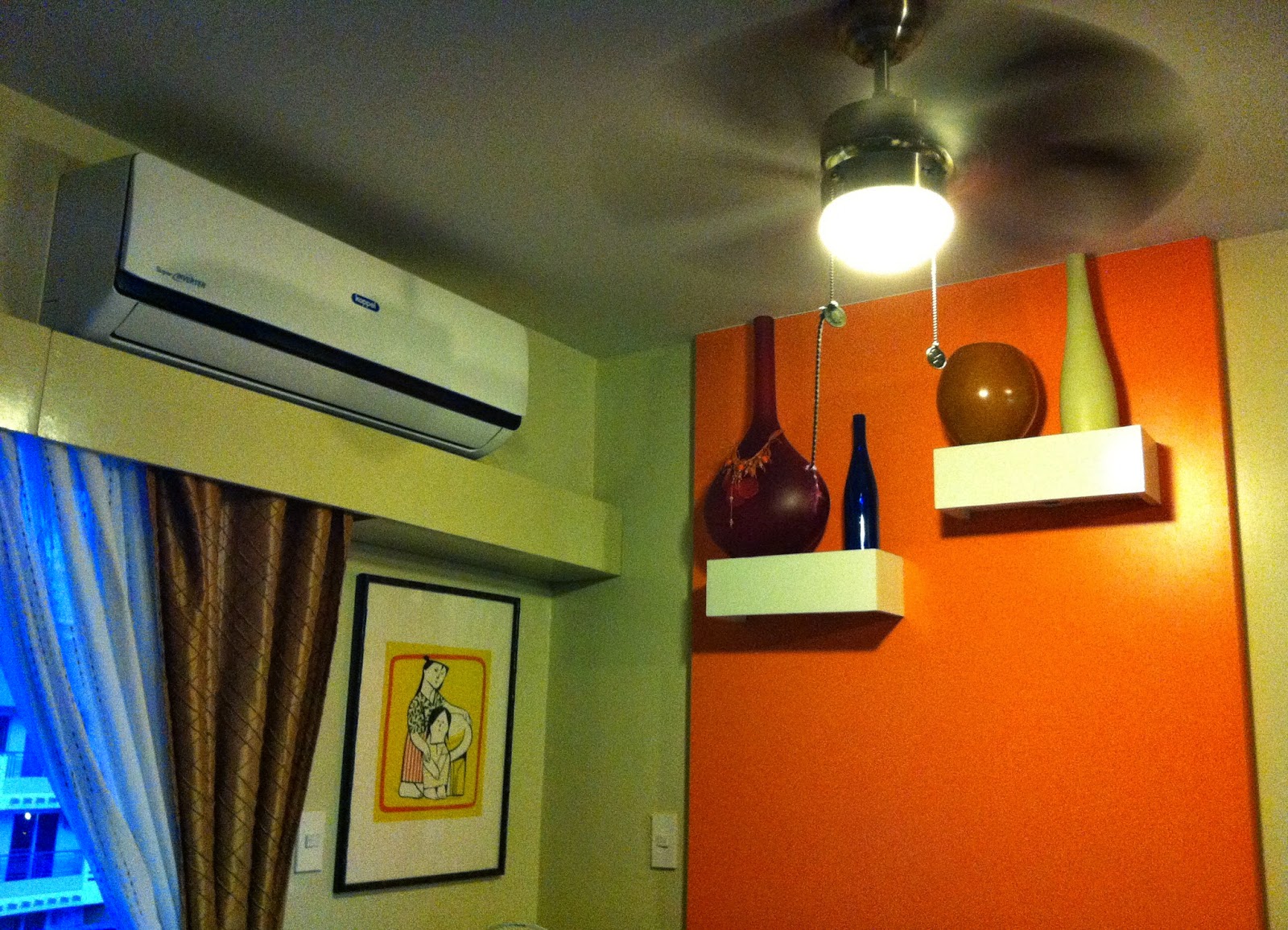 2.  Have the right balance between functionality and aesthetics

Since I spend a lot of time preparing meals for my loves in our kitchen, I want to give the walls a boost.  More importantly, I want to keep this busy area looking spic and span by preventing oil splatters from leaving ugly stains.

I was initially eyeing for those elegant glass Mosaic tiles, but I was shocked when I found out it costs more than P 400 per tile! Fortunately, we were able to find an alternative in The Floor Center in CW Home Depot that only costs P 185 per tile. Although the designs of the glass tiles were not as fancy as the Mosaic tiles, the alternative we got looks tasteful and also serves the same purpose.

We're happy that we also found a design that goes well with our kitchen cabinet and granite counter. The glass tiles were on sale that time so we were able to get it at a discounted price of P 139 per piece! Ding ding ding! I just love savings! Here's a before and after shot of our kitchen walls. Now I can fry and grill all I want without fear of leaving a map on the wall!