The Mind Museum in the Eyes of A 2-year Old

The Mind Museum in Bonifacio Global City is a world-class science museum that is a popular destination for grade school exposure trips. Initially, we were hesitant to take Caleb for a tour thinking that he might be still too young to appreciate it. But since he is already familiar with planets, robots, dinosaurs and any moving matter, particularly cars, helicopters, airplanes and construction vehicles, we decided to take him on his first science tour.

December is the off-peak period for the museum because schools are on holiday break. I got a good discount at dealgrocer.com for an all-day pass for the 3 of us. Yes, we had to get him a ticket because kids 2 feet and below are the only ones who can go inside for free. Regular ticket price is P600 for a 3-hour pass or P750 for an all-day pass. Another upside is that the place is not crowded with rowdy school children.

As we walked pass the ticket booth, we were greeted by a robot that got our little boy all fired up. 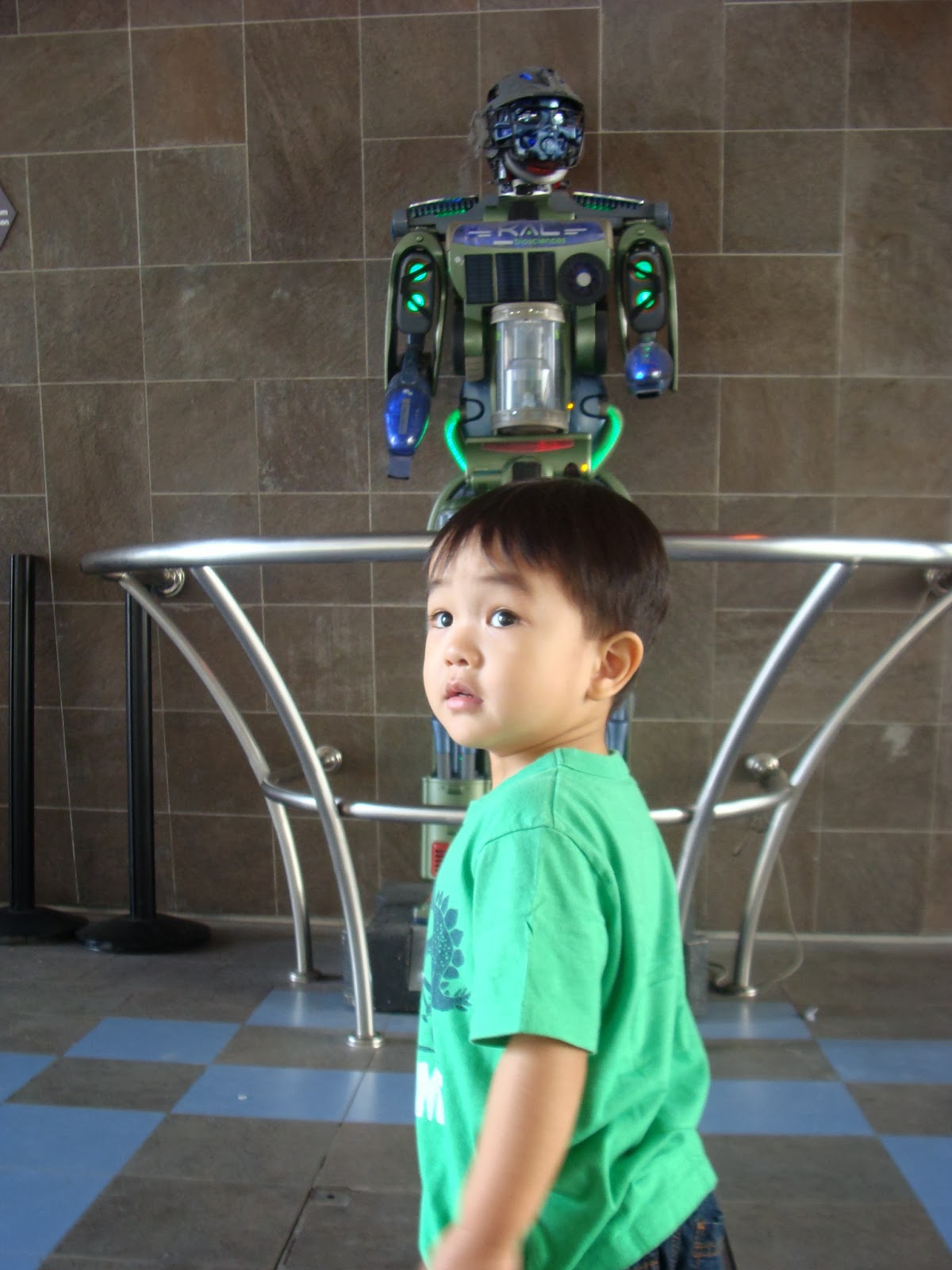 The museum leads to 5 halls/ galleries - The Life, The Atom, The Earth, The Universe and The Technology gallery that covers the entire mezzanine.

After talking a walk through the dinosaur hallway, his attention was immediately drawn by the beach balls that were being lifted by tube blowers. 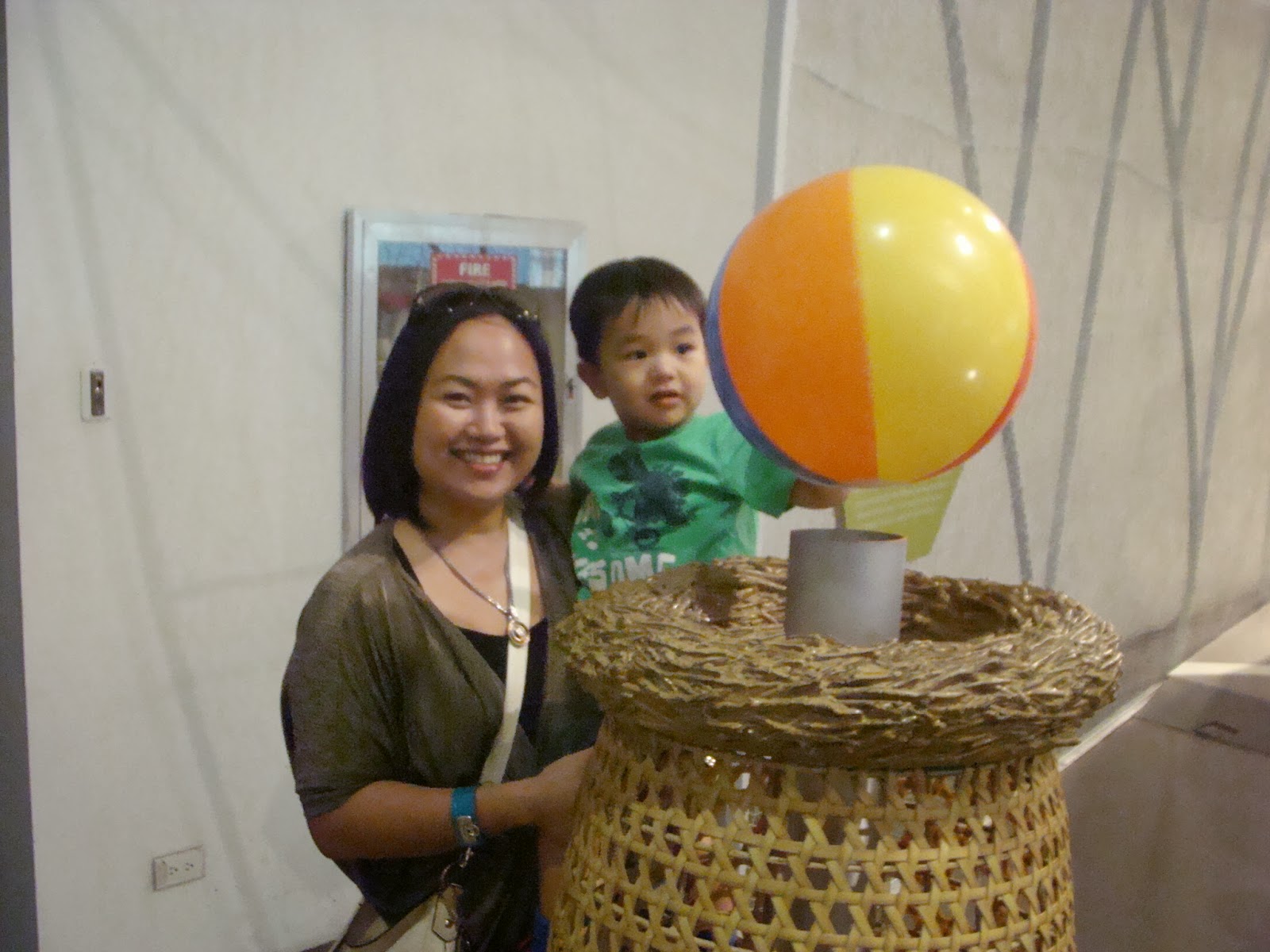 He marveled at the huge whale shark display, but refused to come near its mouth. When he was convinced it was not real, he came over to take a closer look. 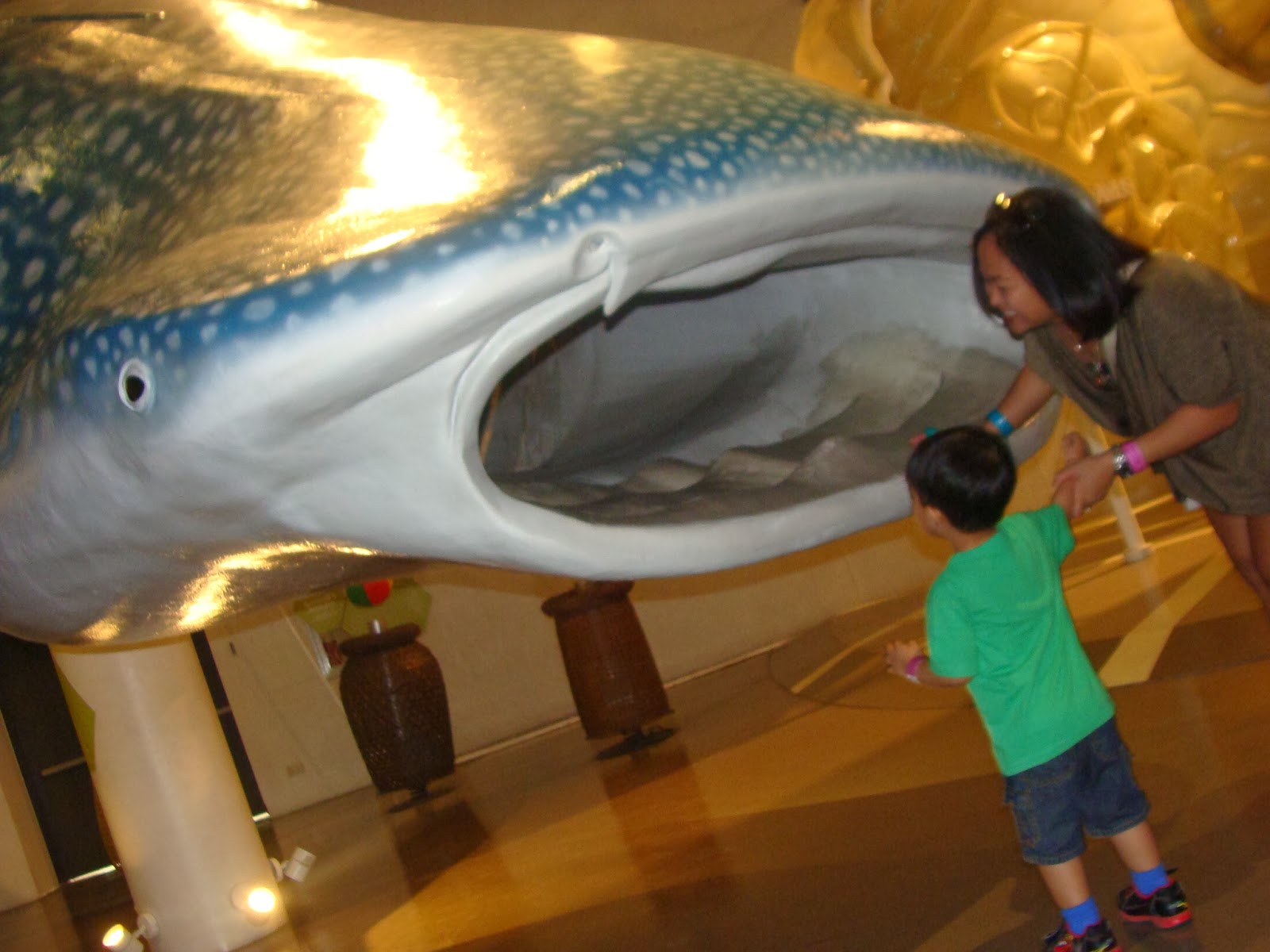 In the Atom Gallery, Caleb tried to take a big bite of the huge chocolate. This was a good introduction of how everything is made up of small particles called atoms, even after realizing the giant chocolate is a fake. 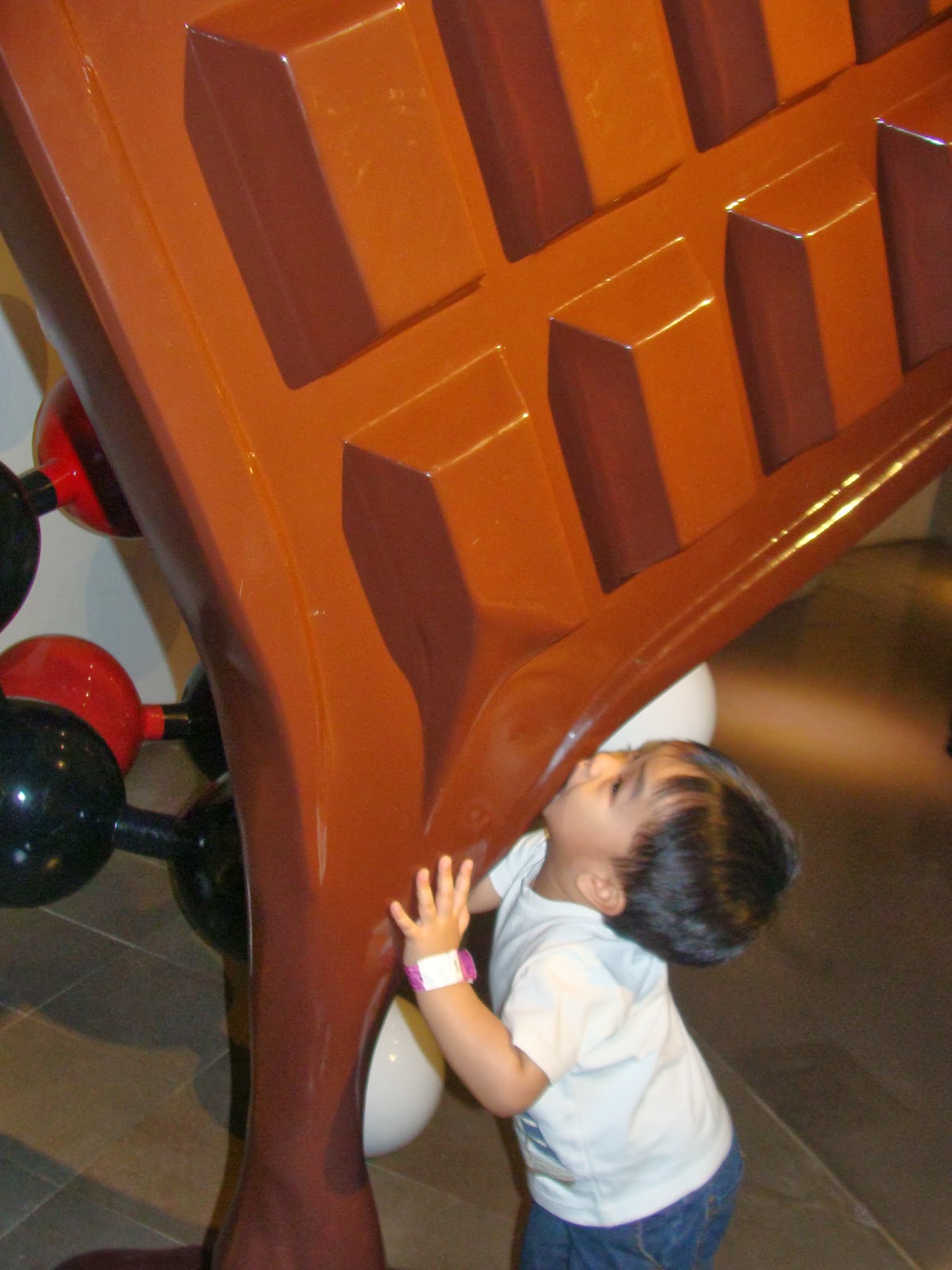 In what he called the giant soccer ball, he was first introduced to MOLECULES. I find it quite cute hearing him just say the word. He played with the atom balls and stuck them together as if he was just building ordinary blocks. 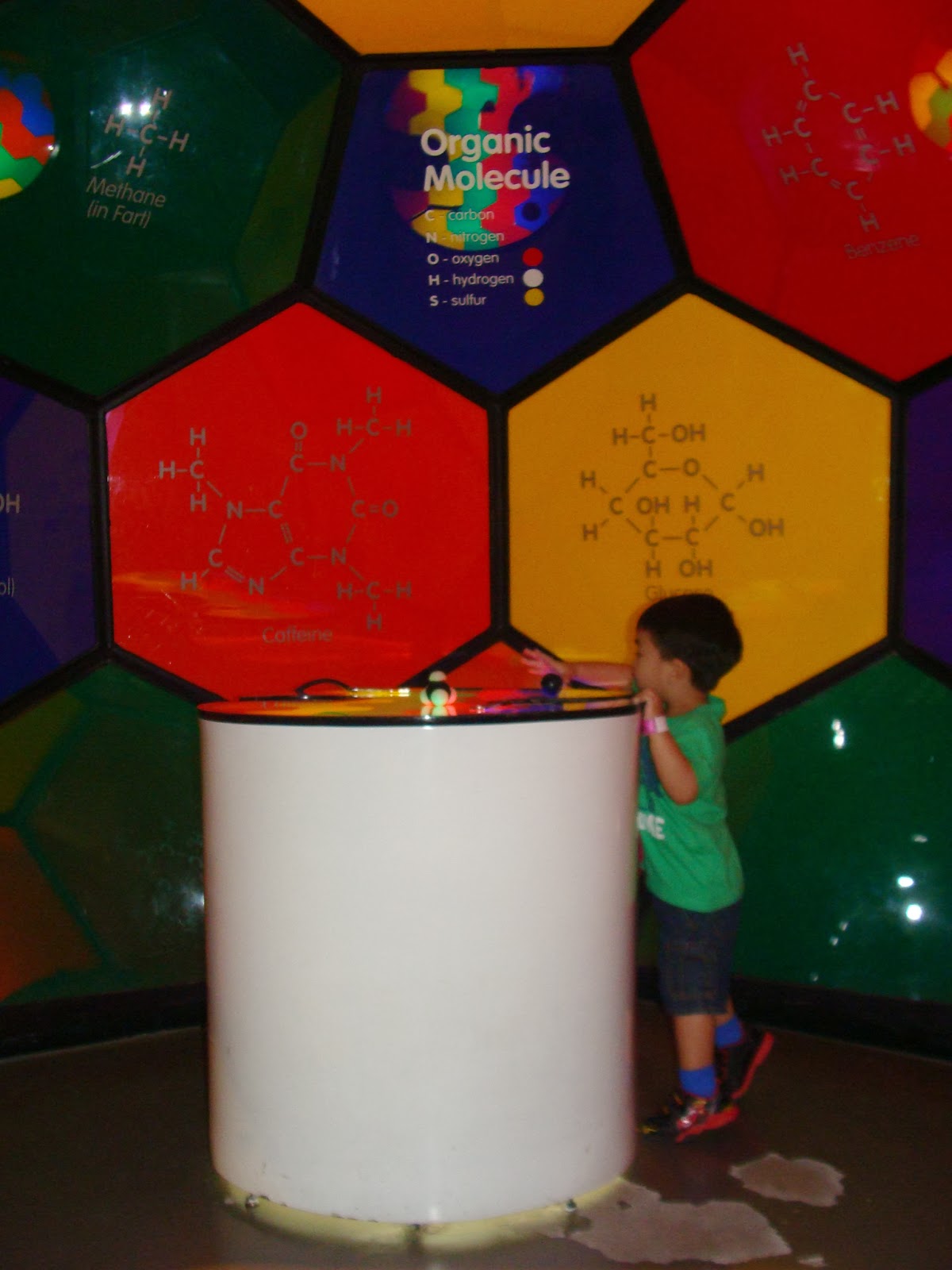 We have read about volcanoes and lava before so I was not surprised that this was the first thing that got his attention in the Earth gallery. 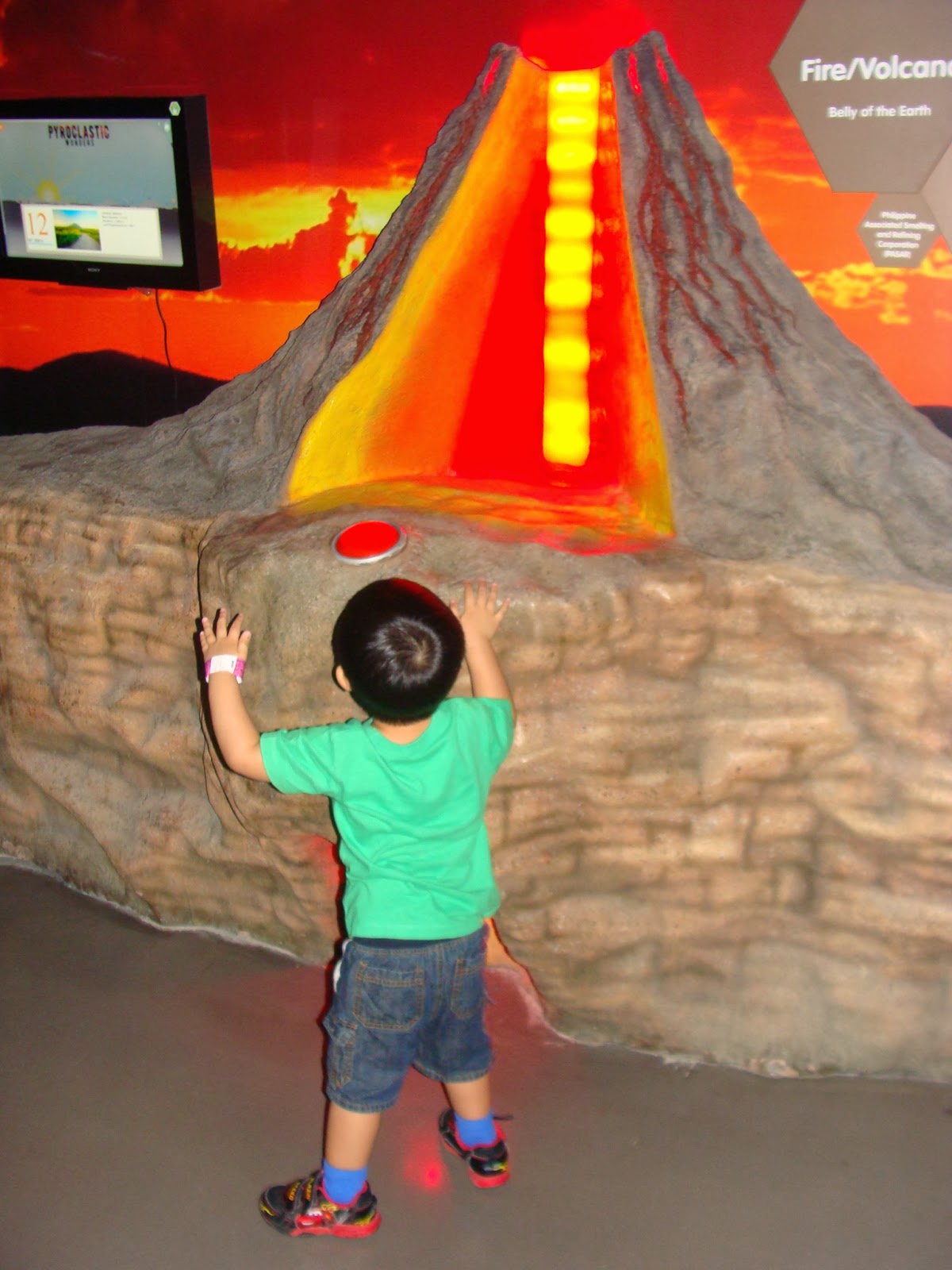 He roared like a dinosaur as we climbed up the stairs for a closer look at those sharp fangs. 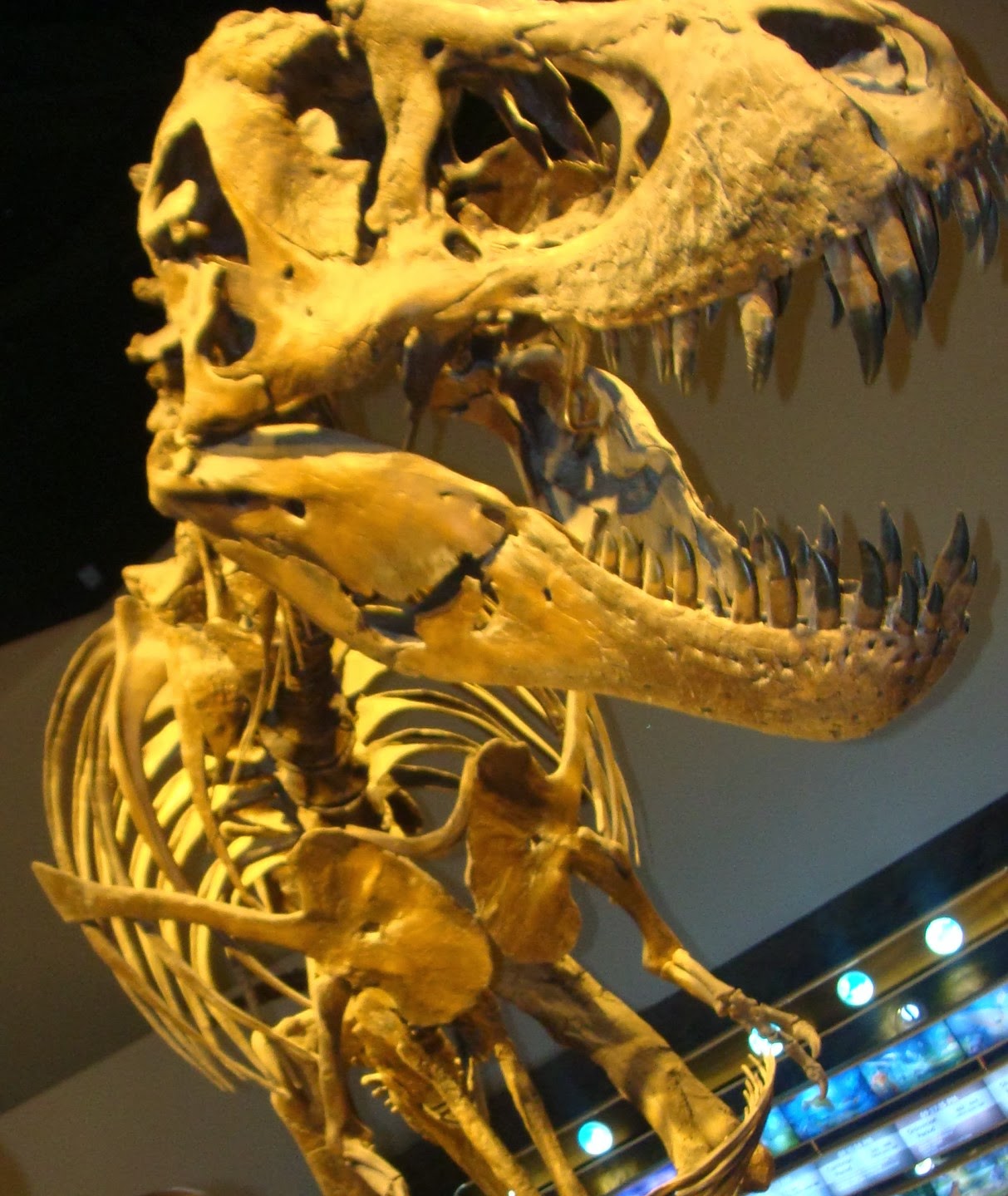 In the Universe gallery, Caleb came face-to-face with an astronaut. He stood in front of the display, as if wondering how he would look like with the gear on. He said before that he wants to be an astronaut when he grows up.

We also played guessing game as he identified the moon phases by its shapes like full moon, semi-circle and crescent moon. 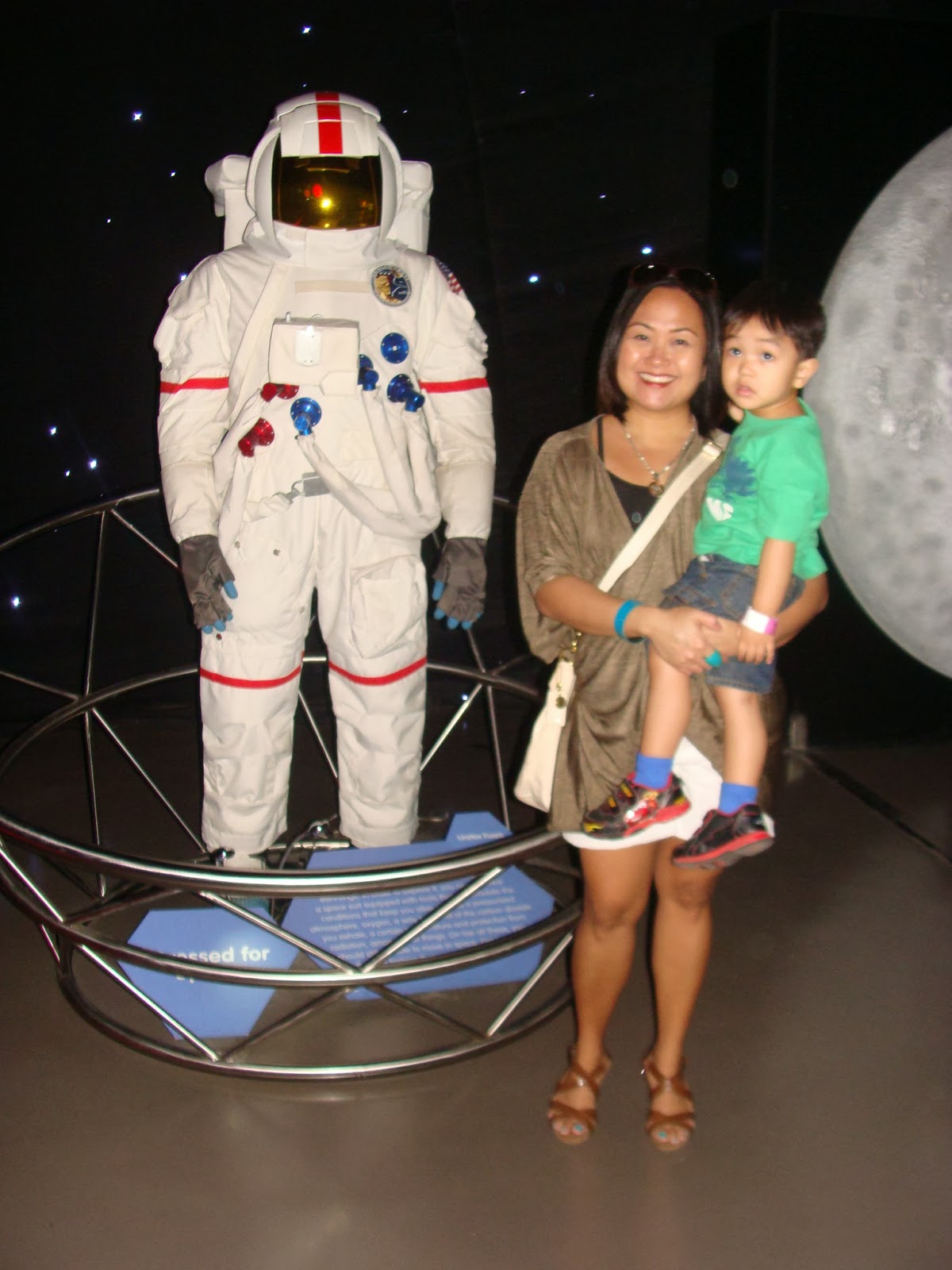 At the Technology gallery, he was enthralled by the different car models and airplane display as he mimicked an engine sound. What is it with boys and wheels, anyway? 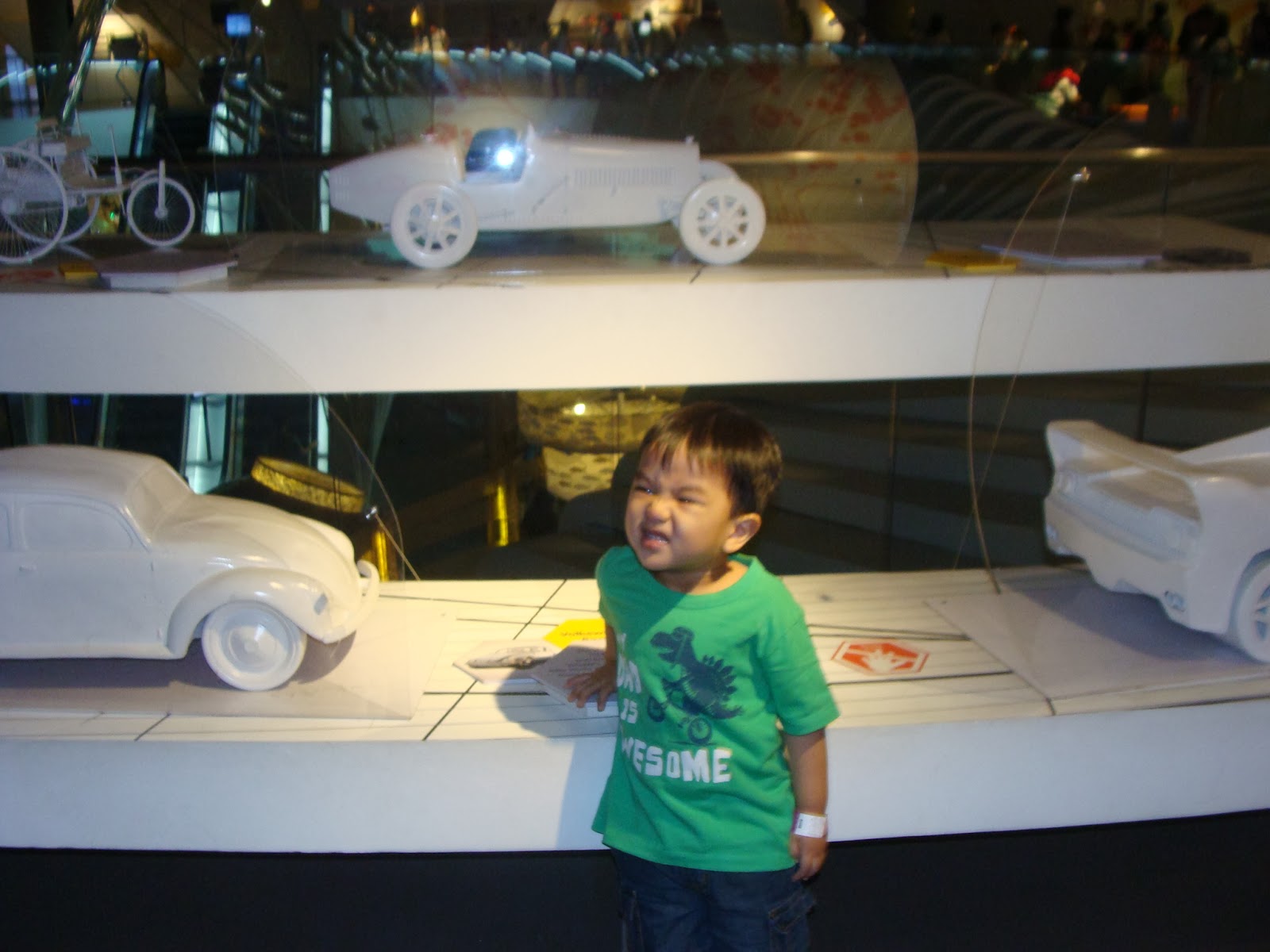 We took our time in the Technology gallery, and came back for him to explore a bit longer after we went out for lunch. Caleb enjoyed playing with the moving bridge with his dad, even using it as a runway for his toy airplane. 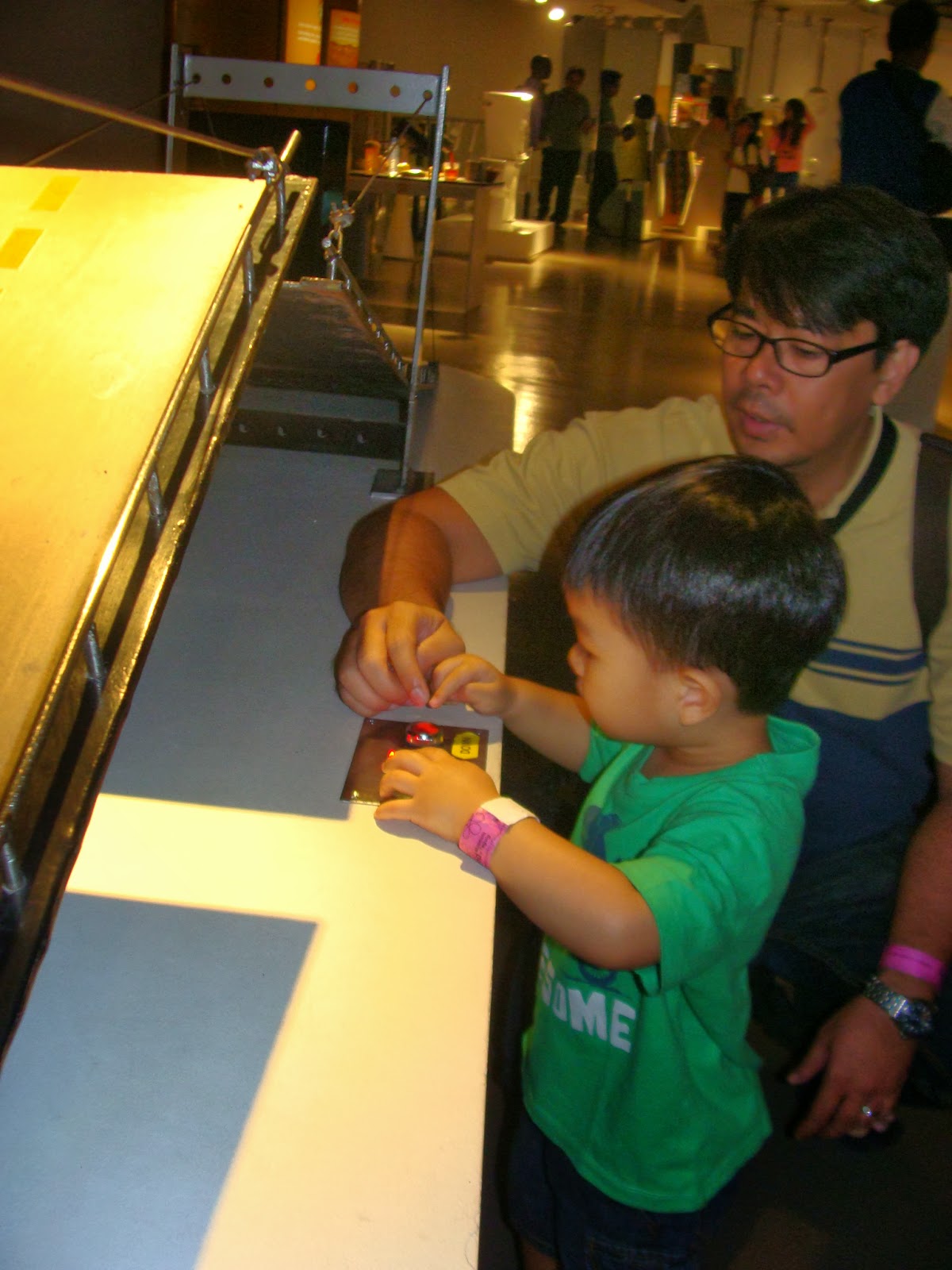 Outside the museum, kids can also enjoy the Museum at the Park. The big drums had it for our active tot. 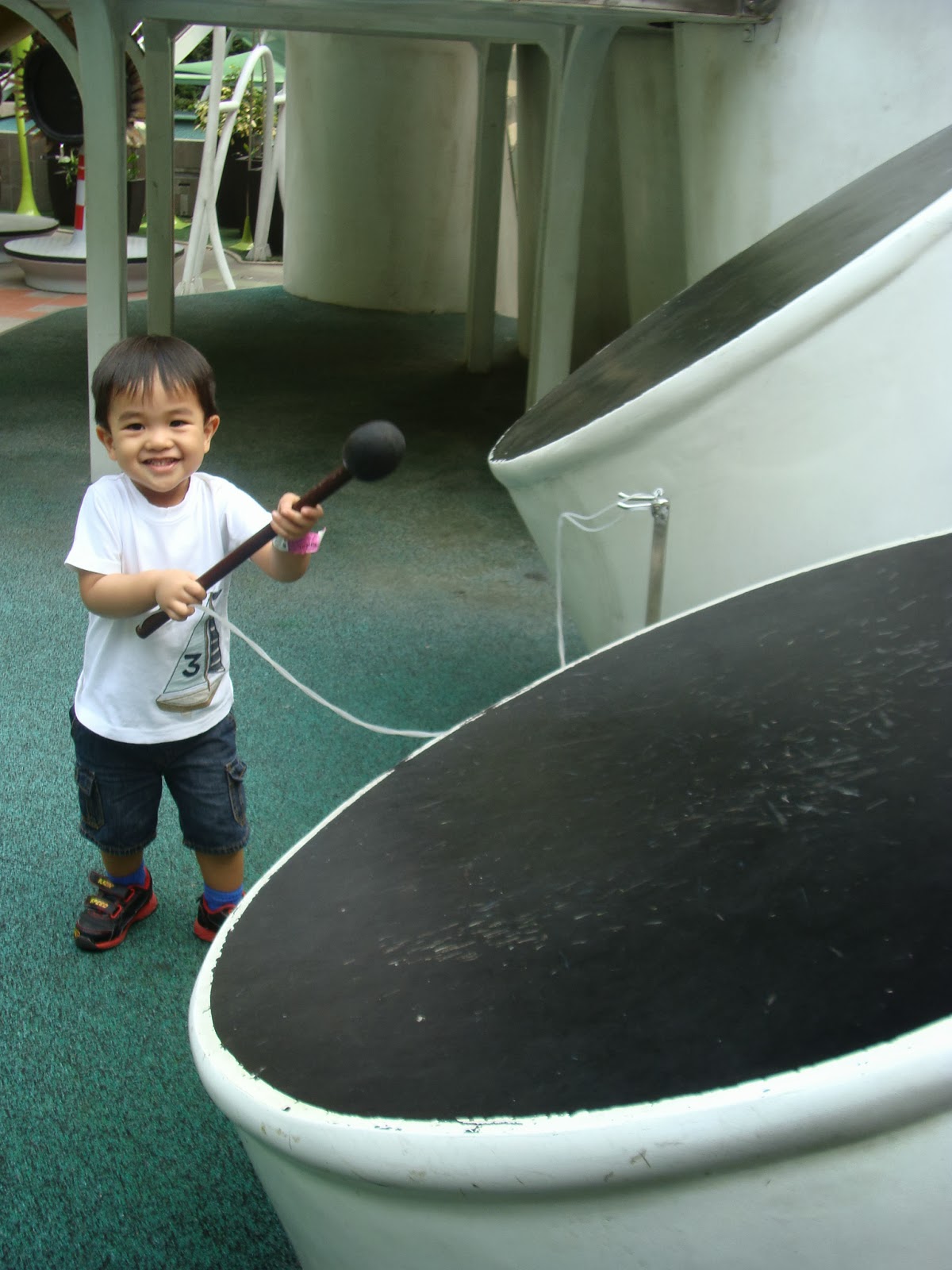 At the end of our tour, Caleb was so exhausted, he fell asleep as soon as we strapped in his car seat.  My husband and I could not have enjoyed it better without him. Back in grade school, science seemed quite a complicated subject. But in the eyes of our 2-year old, everything, including the seemingly ordinary can be fun to learn and explore.
Posted by Unknown at 5:27 PM

Email ThisBlogThis!Share to TwitterShare to FacebookShare to Pinterest
Labels: All About Kids, Family, Places